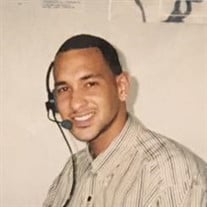 Suzanne Harrison (nee Guyadeene) and Maurice Harrison, Jr, were Blessed with the arrival of their first son, Andre Harrison on April 20th, 1978 in Mandeville, Manchester, Jamaica. Shortly after Andre’s birth, the family migrated to Ft. Lauderdale, Florida. They subsequently moved to Poughkeepsie, New York, where Andre was soon joined by a brother, Shaun. Andre completed most of his education in Poughkeepsie, and then completed his last year of High School at Piper High in Sunrise, Florida, after moving back to Florida with his family. He also attended the Business Management Program at Broward College. Andre has been a loving brother to Shaun, and also his other three brothers, Joshua Jonathan & Ryan. Andre also enjoyed writing poetry and rap music as hobbies and sometimes fancied himself to be a comedian. Sadly, Andre passed away on August 1st, 2019. Andre is survived by his Mother, Suzanne (Suzie), his Father, Maurice (Junior), his brothers, Shaun, Josh, Jonathan & Ryan, his Grandfather, Wesley Guyadeene, as well as many Aunts, Uncles, Cousins, Nieces & a Nephew. In closing, the family can find comfort in knowing that, “Death is not extinguishing the light. It is putting out the lamp because the dawn has come.”* * Rabindranath Tagore, Writer

The family of Andre Harrison created this Life Tributes page to make it easy to share your memories.

Send flowers to the Harrison family.