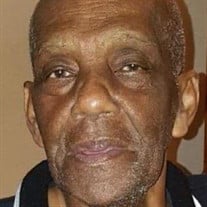 The Funeral Service will be live streamed on Grace Funeral Chapels Facebook Page GRACE FUNERAL CHAPELS – Facebook Live Go to the Grace Funeral Chapels page on Facebook.com (facebook.com/gracefuneralchapels) When on the Grace Funeral Chapels Page SCROLL DOWN to click on the LIVE service for your loved one at the appointed time of the Live Stream Asquith Henry Born June 23, 1932 Rock River, St. Mary, Jamaica Asquith was the 5th and last child born to Eustace Henry and Elizabeth Moyston. Eustace and Elizabeth had four children before Asquith; Ferron Henry (deceased), Lance Henry (deceased), Ita Henry, and Baldwin Henry. Baldwin and Asquith were the youngest and developed a very special relationship. Wherever Baldwin was Asquith would find himself there also. Each time Baldwin moved so did Asquith; from Jamaica to England, from England to New York, and from New York to Florida they have been inseparable. They would remain close and Baldwin was a great source of comfort, knowledge and inspiration to Asquith throughout his life. Asquith retired to Florida where he lived and shared his life with his longtime family friend, Metabelle (affectionately known as Cherry). She was his other great source of comfort and knowledge. Cherry was his constant go to person for most day to day things in his retirement years, until her passing in December 2015. After Cherry’s passing, her granddaughter, Roxanna moved in to take care of Asquith. She and her son have been there with him until he passed. Shortly after Roxanna moved in, her cousin, Triff moved in also. Both provided much assistance to Asquith over the past 4 plus years. Asquith was a quiet and simple man, who never hurt anyone. His sister, Ita remembers everyone just instantly liked him because of his easy and laid-back demeanor. His niece Jacky remembers him being very entertaining with his stories of the old days. His niece Deirdre remembers he had a great appetite for food! Oh yes, he would tell every and anybody about his love for food. That was one of his joys of life and anyone who knew him knew that about him. Some of his favorites were ackee & saltfish with fried dumpling and cow foot. He also loved homecooked soup, but it had to have dumplings. His grand niece Krystal remembers his smile and his laugh. He smiled with his whole face, laughed hard and loud and loved to hug. He enjoyed watching Jeopardy, Wheel of Fortune and the news daily. He loved to be in the company of others even if he was not contributing much to the conversation. A few weeks before he passed, two of his female neighbors would visit him and he would light up and chat with them and you would never know he was in any pain or discomfort. One day he even put on his hat and they took pictures. He had his own photo shoot and it was fun for him. In May of 2020, the men of Gateway Church visited and prayed with Asquith. During this visit, Asquith boldly committed his life to the Lord and all who were present rejoiced with him. Each day after he wanted to recite the Lord’s prayer and Psalms 23, which he did with Roxanna and Nathan’s guidance. The family would like to express their sincere appreciation to all who cared for him over the past 5 years. A special thanks to Michelle Buchanan (niece), Roxanna Snape (niece/caregiver), Triff Snape-Hunter (caregiver), Sandra Spencer (Case Manager), Vanessa Seide (Home Health Aid), Seymour Scott (Nurse) and Mr. Humphrey (friendly visitor). Asquith is survived by two siblings: Ita and Baldwin, two nieces: Jacky and Deidre, four nephews: David, Owen, Godfrey and Errol, grandnieces and grandnephews, a host of family and friends. He will be missed by all who knew him.

The family of Asquith M. Henry created this Life Tributes page to make it easy to share your memories.

The Funeral Service will be live streamed on Grace Funeral Chapels...

Send flowers to the Henry family.