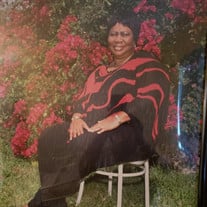 Cicely Eunice James passed away peacefully on February 22, 2022 in Sunrise, Florida. She was surrounded by some of her children and grandchildren. Cicely was born in , St. John Antigua, to Oscar Matthew and Eulalie Louisa Adams. Obituary Cicely Eunice Matthew-James was born, April 3, 1947 to the late Eulalie Louisa Adams and Oscar Matthew in Greenbay, St. John’s Antigua where she spent her formative years. Cicely Migrated to St. Croix US Virgin Island in the early 70’s, while there she met and got married to the late Raphael James. She was the biological mother of five children but was a mother to many In St. Croix she worked for Master Time Watch factory as a Watch Maker for several years, and was an extremely hard and dedicated worker. She was excellent in the kitchen, so because of her culinary skills she was often called upon to cook for weddings, parties and social events throughout the island. She made a fabulous Goat water, among other thing. It was often said “that she put her foot into it” when executing her culinary skills. In St. Croix she was affectionately, known as Reds, and was very popular and was, known on the island for throwing some of the best parties ever, as her personality and cooking drew people to her. Cicely loved to dance, give jokes and was often time the life of the party. Cicely, was a straight shooter and very outspoken, she told you exactly what she though and felt and some would say her tongue had no filter. However, despite how one felt about what she had to say, she was a softie who cared about people. Cicely was a very caring and loving person who loved her children and grandchildren, and her family as a whole and worked very hard to provide for them. Her love of family motivated her to work hard and she made sure that she moved her entire family from Antigua to the US Virgin Islands. Her love of family was not just limited to blood relatives but for fellow Antiguans. She was an unofficial point of contact for her fellow country men and women when they moved to St. Croix. She was the first to extend a helping hand with food and monetary assistance often providing a safe haven for them. In the 90’s Cicely relocated to Miami and despite a change of scenery she was the same determined hard worker she had been her entire life. She worked for several hotels in Miami Beach and then for the department of Education as a school crossing guard for approximately 5 years. She attended Gospel Life Apostolic Church and then later transition her attendance to the Church of God of Prophecy. She loved the Lord, praying and listening to gospel music and playing her tambourine at church. Two, twenty-two, twenty-two, a once in a life time occurrence on the calendar will also be a once in a life occurrence for us all, as that was the date we lost a mother, a friend, a sister, an aunt, a grandmother, a great grandmother. She is survived by her children: Beverly Matthew Christian, Jasmine Osborne-deceased, Raphael Emmanuel James Jr, Cheneca Weeks-Zetrenne, and Shawn Michael Matthew. Grandchildren: Akeem Rogers, Stephanie & Stephan Bramble, Josiah Isaiah, Shameka Mapp, Raphael James III, Karen James, Malaysha Matthew & Major Matthew, Latee Wilburn, Jeremiah Zetrenne, John Zetrenne Jr., Kamarian Williams Great Grand-children: Kymani Rogers and Layla Walker Sisters: Sonia William, Ruperta Romeo, Ineta Martin, Veronica Chiddick-Williams, Junie Beverly Baptiste-Williams, Melba Matthew Brothers: Dave Chiddick, Keithroy Chiddick, Winston Thomas, Ivor Matthew Sons-In-Law: Lesroy Christian, John Zetrenne Brother-in-law: Austin Williams Daughters-In-Law: Mary Matthew, Tanisha James, Keioni Rogers Sisters-In-Law: Dolly Borsato, Iris Matthew Neices: Chyka & Cheneca Benjamin, Charlene Jameson, Cherrica Jackson, Tricia-Williams-Cepeda, Tacita William-Lloyd, Zelma Williams, Shakimba Williams, Hyacinth Clarke-Amantrading, Chantel Joseph-deceased, Nychak Joseph, Nysha Williams-Charles, Dornae Clarke –deceased, Chanda Joseph, Nataki James, Nataki & Rasheeda Romeo, Alicia Ryan to name a few for they are too numerous to mention. Nephews: Addis Benjamin, Kareem Young, Higaldo, Achama & Kareem Williams, Mustafa William-deceased, Addis Benjamin, Gary Jarvis, Avery James, Kwasei Fenton, Shawn & Rasheed Romeo, Chester Clarke-deceased, to name a few they are too numerous mention. Close friends: Enid Green-deceased, Josephine (Gloria) Smith, Icilma Hendrickson, Sonia Hodges, Christophene-Nenen, and Veronica Brown, Catherine Housen, Ioni Appleton.

Cicely Eunice James passed away peacefully on February 22, 2022 in Sunrise, Florida. She was surrounded by some of her children and grandchildren. Cicely was born in , St. John Antigua, to Oscar Matthew and Eulalie Louisa Adams. Obituary... View Obituary & Service Information

The family of Cicely Eunice James created this Life Tributes page to make it easy to share your memories.

Send flowers to the James family.