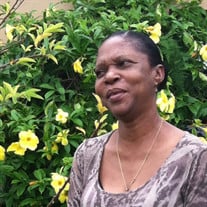 Dahlia B. Palmer was born on August 5th, 1959 in Maypen, Jamaica to Mavis James and Rudolph Palmer. She along with her 6 siblings primarily grew up in Effortville, affectionally known as “Farm”. She attended Maypen Primary, Zion Hill Elementary in Saint Mary, and Clarendon College. At a very young age she showed interest in politics. In her 20s she became very involved with the People’s National Party. Her contribution and dedication to the progression of Jamaica was displayed in her actions while being an active member of the PNP. In 1980 she met Paul Madeira and they were married on July 22, 1981. Dahlia moved with her new husband to the USA shortly after where they would eventually set roots in South Florida. Being in a new country, Dahlia’s ambition pushed her into the medical field after a few years of working different jobs to make ends meet. While in Nursing school, she was selected to compete in numerous medical competitions. She would compete not only against students from other schools, but also against professionals. She did so well, she was selected by the state of Florida to compete in the National competition where she would place 2nd. She would later graduate from McFatter Technical College with her LPN license and begin her 30+ year career with Broward Convalescent Home, later to be named, Broward Nursing and Rehab Center. In 1991 Paul and Dahlia bought their home in Melrose Park where she resided until her death. While living in Melrose she became a surrogate mother for many of her two son’s friends and was regarded to as Madooks or Ms. D. We will always remember the parties she would keep at her house when Paul left for his camping trips as epic. She would sit down and talk to anyone that wanted to chat on the front porch with her and came with good spirits. She especially loved to conversate about politics. More than anything, Dahlia was always willing to help others in need. While struggling to take care of her own home and children, Dahlia continued to help her family in Jamaica. She would pack barrels every Christmas to make sure everyone that lived at her mother’s house received something for the holidays. She would put numerous nieces and nephews through school while making sure her mother was taken care of. Dahlia also helped her friends and family in the states. She and Paul would open their home to any individual or family that needed a hand. We often would have people living with us and she never asked them for anything but to do better for themselves. Dahlia dedicated her life to helping others. As she became older and grandchildren were born, she made them her top priority. She would always make sure they had everything they needed and wanted. They are her pride and joy! She would keep all of her friends informed on any small accomplishments they would make and would glow with love whenever she was with any of them. She would take flights to visit them even though she was terrified of planes. She potty trained them, taught them how to talk far earlier than anyone expected, and simply spent so much quality time with them that we would be so surprised with the changes they would have every time we got them back from a long visit with Grandma and Grandpa. With her the kids knew they had an ally. Dahlia loved the simple things in life like, watching the excitement of her surroundings from the comfort of her front porch or a cruise with Paul in the Caribbean. She would take frequent trips to Bealles Outlet and would spoil the grandkids rotten allowing them to pick gifts for themselves. She loved to see her kids doing and looking good. Even at a young age she taught them to take pride in themselves no matter how much money they had or where they were from. She loved to cook and her meals are well known throughout the bellies of her family and friends. She loved to be informed on what was going on in the world and wouldn’t miss channel 7 news unless visiting with her family away from home. Dahlia’s accomplishments should be remembered as remarkable and motivate those that knew her to have goals for themselves and achieve them regardless of what they are. She and Paul made sure her children had a normal loving childhood. They set a foundation that their children had the opportunity to attend college and open their own businesses. Dahlia’s body will be laid to rest in Maypen, Jamaica on December 16th, 2020. She will be missed by her Husband, Children, Grandchildren, Siblings, Nieces, Nephews, In-Laws, Friends, and countless others that she has touched in her time with us. Heaven has truly gained an angel.

Dahlia B. Palmer was born on August 5th, 1959 in Maypen, Jamaica to Mavis James and Rudolph Palmer. She along with her 6 siblings primarily grew up in Effortville, affectionally known as &#8220;Farm&#8221;. She attended Maypen Primary, Zion... View Obituary & Service Information

The family of Mrs. Dahlia B Madeira created this Life Tributes page to make it easy to share your memories.

Send flowers to the Madeira family.