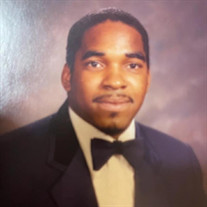 David Keith Johnson was born September 25, 1963 in Elizabeth, New Jersey to Robert Naylor Johnson and Gloria Pratt Daniels. Raised at an early age of 3 years old by step-father, the late Ethreal James Small. His mother later married Jesse Fenderson. During his earlier years, he was a member of and baptized at First Baptist Church in Linden, NJ. He participated in many activities such as swimming, boy scouts, Pre-Navel training, church choir, and a newspaper carrier. He moved from Linden, New Jersey to College Park, Georgia as a teenager and continued his education at M.D. Collins High School and graduated in 1983. He joined the Navy thereafter to serve his country and graduated August 4, 1983. He became an electrical construction engineer during his time of service. David departed this life on January 5, 2022 in Memorial West Hospital in Pembroke Pines, FL. He was a good man. Very pleasant, easy spoken, and humorous. He was exuberant, adventurous, and so full of life. He always helped others and was so well loved by those who knew him. He leaves to mourn his passing, his loving wife Melissa Frady Johnson and his two sons David and Dominic, and stepson, Antonio. His two daughters, Amira Jenrette (Terrell), Taylor Johnson and granddaughter, Lauryn Hinton. His loving mother, Gloria Fenderson (Jesse). His brother, Robert “Tamir” N. Johnson, Jr. His mother-in-law, Ruth Frady and his nieces, nephews, cousins, and many relatives and friends whose lives are forever better for having known his love.

The family of David K Johnson created this Life Tributes page to make it easy to share your memories.

Send flowers to the Johnson family.