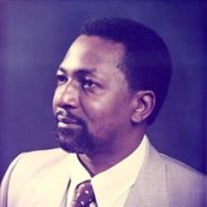 Glouster C. Grant aka Uncle Dickey, died peacefully at Good Samaritan Hospital,in West Palm Beach, Florida, on February 5th, 2022, at the age of 81. Uncle Dickey was born on October 26th, 1941, in Davis Town,which is a little district located in the Parish of St. Ann, Jamaica, West Indies, to Norman and Violet Grant. He was the fourth and youngest son of the family. Uncle Dickey was always a man that you could not forget once he came around. Who could forget that wonderful smile and laugh that could make you involuntarily laugh along. The memories that I would like to share of him is of when I was a little girl, he had taken me along with him to ride on a boat with him, my motion sickness had the best of me and he sure made me never forget that because of my nausea he had to turn the boat around and take me back home. I remember him lifting me up and placing me to sit on the top of his big car so that I could take a picture with him. One of my favorite times we shared was when he would visit my Auntie Petal and Aunt Violet in Harbour View, Kingston Jamaica, and he would would greet me with the biggest smile and say to me “Come here, Chulu (my nickname while growing up), and I would run to him and he would pick me up and throw me up in the air. I would scream, and laugh at the same time, because I thought I would touch the ceiling, but he would do it again a few times. He did this each time he saw me, when he visited. Through my little eyes, I thought he was a giant, because he never let me fall and always caught me. Another moment that we shared was when he and my Aunt Brenda drove me to College, despite the many obstacles in my life at that time he still was going to let me fall, I thought. He has been there for me, as a father figure, so with that, I must say again, now, “Thanks Uncle Dickie, for not letting me fall.” Uncle Dickey was such an accomplished carpenter, so that his work was breathtaking to view. I was often told about his awesome skills when it came to woodwork, both creating and building things. I am thankful that I was able to be a witness to some of his handy works. Besides being passionate about his carpentry skills, he loved life and was very expressive with his views on life and his view of the world. Whenever I had the opportunity of speaking with him, it was never a dull moment, and of course that deep gut filled contagious laugh that would have me laugh along as well. Uncle Dickey is survived by siblings Brenda Williams, Jarried (Petal) Grant, Zhelpha (Auntie) Grant and Hannah C. Grant (Mother to me and Lilieth)his sister. Although he does not have any surviving children, he surely has several nieces and nephews that know of him and certainly will learn about him.

The family of Glouster Constantine Grant created this Life Tributes page to make it easy to share your memories.

Send flowers to the Grant family.