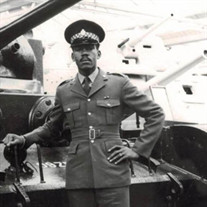 Hartley Wellington Woolcock’s Obituary Hartley Wellington Woolcock, a beloved husband, father, grandfather, brother, uncle, colleague, veteran, service member, and friend, died peacefully on Monday, January 31, 2022, in Fort Lauderdale, Florida, at the age of Seventy-Nine (79). Hartley was born on January 8, 1943, in the town of Mount Airy in Westmoreland Parish, Jamaica, West Indies, to Ms. Inez James and Mr. Seymore Woolcock (a Locomotive Engineer for Kaiser Bauxite/Aluminum from St. Elizabeth, Jamaica). Hartley was raised by his grandparents, Simon and Constantine Woolcock. He was one of sixteen (16) children, including Barrington, Basil, Gwendolyn, Keith, Lionel, Livingston, Patricia, Ray, Wayne (Woolcock), Marcia Woolcock - Sydnor, Cedric and Jean (Brown), Alrick Barrett, Sandra Powell, and Sybil Foster. Growing up in Jamaica, West Indies, during the advent of suffrage in 1944 and through to the achievement of independence in 1962; Hartley was raised by a hard-working mother and learned the necessity of turning his hand to subsistence farming and developing "homegrown" responses to constraints of educational, social, and economic conditions on the island and in the Caribbean region. He pursued other intermediate occupations to transcend challenges of economic, social, and political pressures as Jamaica began a transition from a crown colony into an independent state, seeking a better future as part of a general trend toward the self-sufficiency of the island. He attended Mount Airy Primary School and subsequently entered the Jamaica Combined Cadet Force - a disciplined organization with a rank structure. He then joined the Jamaica Constabulary Force as a Police Officer. He thereafter enlisted in the Military (Jamaica Defense Force) in 1960 and attained the rank of officer. He was honored with the charge to lead the processionary of forces commemorating Jamaican independence (August 6, 1962 - date celebrated as Independence Day, a national holiday) from the British Government. In 1968, at the age of twenty-five (25), Hartley immigrated to the United States determined to start a family and build a better future. Shortly after he arrived in America, he began his career with Alexander’s Department Store, NY, as a Security Manager. Hartley dedicated many years to corporate security and spent several more years in Private Car Service transportation. On retirement in 2011, he moved with his wife, Doreen A. Samuels-Woolcock, whom he wed in 1993, from the Bronx, NY, to Parkland, Florida. Throughout his adult life, Hartley was known for his affable personality and charming effect on some people; his versatile impact on others; his gregarious and straightforward engagement with most; and his generous dynamic love of social settings. A trustworthy and considerate friend/companion — challenging and impartial —was straightforward, bibulous in early years, and convivial. He was a generous/witty/dedicated individual who loved life and had a “magic” effect that made people like him. He loved to entertain, and parties were known to last hours into the morning. Hartley was defined by his commitment to family and the loyalty and generosity he shared with his friends. These qualities of his were unmatched. Hartley loved to dance, dressed to kill, and had a presence that blanketed any room he entered. He enjoyed traveling with his wife, Mother Doreen, and last but certainly not least, he loved the Lord and accepted Christ as his Savior. We will miss Hartley, who like a river and throughout the river of his life, was placed by God; charted many courses; impacted and touched so many, traversed many terrains, touched many banks, and shaped geographies (spiritually, mentally, emotionally, physically) as his spirit now flows and enters on to the sea of eternity. His legacy of unconditional love, loyalty, generosity, faith, and commitment will forever remain in our hearts. Hartley is survived by his sons Gary, Devon, Damian, and Adrian Woolcock, siblings Livingston, Barrington, Ray, Keith, Patricia, Gwendolyn, Marcia, Sandra, Cedric, Jean, and Sybil, as well as many relatives, cousins, and friends. He is preceded in death by his wife, Doreen A. Samuels-Woolcock (Mother Doreen), sister Alrick Barrett, and brothers Basil, Lionel, and Wayne Woolcock). The family would like to thank caregivers for their efforts, care, dedication, and fellowship in the life of Hartley Wellington Woolcock.

The family of Hartley Wellington Woolcock created this Life Tributes page to make it easy to share your memories.

Send flowers to the Woolcock family.