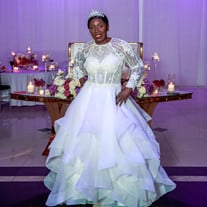 The life of Ilene Elaine Francis Ilene Elaine Francis, the daughter of Thomas Francis and the late Hazel McKay, was born November 29, 1963, in Good Hope, Clarendon, Jamaica. She was the first child out of a family of four siblings. Ilene spent her formative years in Jamaica where she attended Kellits Basic School, Kellits Primary School and Kellits Secondary School. Ilene served as an indoor agent for the Jamaican Labor Party (JLP), assisting on the campaign trail for ? years following her graduation from secondary school. In 1982 Ilene gave birth to her first child and only son, Damion Johnson on August 27. Six years later in 1988 she gave birth to her first baby girl, Rushell Williams on March 9. She gave birth to her youngest child, Rodane Williams in 1990, December 21. She migrated to Fort Lauderdale, Florida, United States along with her three children in 1994, December 5. She established a life for herself and her three children by obtaining her certification in Nursing Assistance that same year. She was known amongst her fellow classmates as a class leader and team player. Ilene established a 23 year career as a private In-home Nurse, aiding over 2,000 Patients. Often providing end of life care. During this time, she received her certification of citizenship in 2002, May 20. Working hard to achieve the American dream as an immigrant was no easy feat. Her perseverance and fearlessness not only created opportunities in America for her three Children and three grandchildren. But she has served as a counselor, teacher, and mentor for many others aspiring to establish a life in America. Throughout her journey she did not neglect her roots in Jamaica, upholding a proactive member of her childhood community and consistently providing support to other Jamaicans in need. Ilene leaves to carry along her legacy, three children: Damion Johnson, Rushell Williams, Rodane Williams; three grandchildren: Damion Johnson II, Layten Powell, Leah Powell; Brother: Windsor Francis; Father: Thomas Francis and a boat of cousins, and special friends.

The life of Ilene Elaine Francis Ilene Elaine Francis, the daughter of Thomas Francis and the late Hazel McKay, was born November 29, 1963, in Good Hope, Clarendon, Jamaica. She was the first child out of a family of four siblings. Ilene spent... View Obituary & Service Information

The family of Ilene Elaine Francis created this Life Tributes page to make it easy to share your memories.

The life of Ilene Elaine Francis

Send flowers to the Francis family.