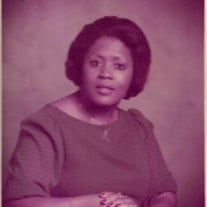 Janet Angela was the third child of Claude and Daphne Johnson who both predeceased her. She was known as Angela to her family and close family friends. Her school mates and work colleagues know her as Janet. She attended Wolmers’ High School for Girls, Kingston, Jamaica. With her family Angela migrated to New York in 1967. She completed high school at Theodore Roosevelt High School, Bronx, New York. She received a full academic scholarship to Hunter College, City University of New York. She earned a Bachelor of Science degree in Nursing in January,1974. Her specialty was Visiting Nursing and she continued to work in that field of nursing until her passing. Her passion as a Visiting Nurse led her to care for many babies and adults with complex health issues. She was very engaged with these patients which often left her to forget about caring for herself. She adopted many individuals along the way sharing with them her love of gardening, decorating, cooking, floral arrangement. She loved to sew clothing and decorative pillows. She gifted many of those items to her expanding circle of friends. Angela relocated to the South Florida area in 1978 where her parents and older brother were already residing. While living in South Florida she met David A Crawford and they were married in June,1984. David predeceased her in 1998. Angela is survived by her four siblings Maurice(Merlyne) ;Sonia; Carl(Judith) and Claude(Beverly). She is also survived by her 9 nieces and nephews: Marcel, Janice (Michael); Geoffrey (Aiasha); Karen; Duane(Rachel);Robert(Gerline); Marcus (Elena) and Mizane Adeyianka and Gail. All of her nieces and nephews have many memorable interactions with Aunt/Auntie Angela that they will cherish. The family’s next generation grew with great nieces and nephews: Sydney, Laila, Elizabeth, Madeline, Geoffrey II, Sean, Valerio, Emma and Avery .Although they are the younger generation they do have memories to and to cherish of their Aunt/Auntie Angela. Angela joined the Seventh Day Adventist church and was associated with the Lauderhill Church. She continued in that faith up to until her passing. She will be sorely missed by family, numerous friends, extended family members in Canada and U.S.A.

Janet Angela was the third child of Claude and Daphne Johnson who both predeceased her. She was known as Angela to her family and close family friends. Her school mates and work colleagues know her as Janet. She attended Wolmers&#8217; High... View Obituary & Service Information

The family of Janet Crawford created this Life Tributes page to make it easy to share your memories.

Janet Angela was the third child of Claude and Daphne Johnson...

Send flowers to the Crawford family.