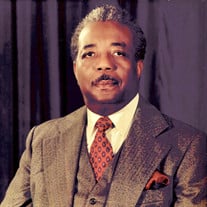 Mr. Joseph Louis Jacques transitioned peacefully in Tamarac Florida at the Florida Medical Center at 1:30 am on Sunday, August 4th 2019 at the age of 95 years old. He was born on January 26th 1924 in Port-Margot, Haiti, the son of Dieujuste Louis Jacques and Fixane Pluviose Jacques. He attended primary school and secondary school in Cap Haitian, Haiti. He continued his studies in Port-Au-Prince at the Lycée Toussaint Louverture. Upon completion of high school, he attended the Université d’Etat D’haiti Faculté de Médecine et de Pharmacie, Ecole de Technologie Medicale (FMP/TM) and graduated with a Diplôma de Technologiste de Laboratoire. After moving to United States in 1962, Joseph L. Jacques began working for many hospitals and labatory’s as a Lab Tech in NYC, until he retired in 1995 from Kings Highway Hospital in Brooklyn, NY and immediately relocated to Fort Lauderdale. He was also a world traveler visiting France, Italy, England, Russia and Canada religiously to the feast of Notre Dame du Cap in Québec, Canada and many islands in the Caribbean just to name a few places. In addition, he had a thirst for politics. Dating back to his younger years, one could always view how he engaged in deep political debates. Until his transition, he listened to Haitian Radio daily for political updates of his beloved homeland. Joseph was a loving family man, who loved all of his children. He was blessed to have fathered Chandler, Faride, Garita and Joanne who transitioned to be with the Lord in September 2015. In addition to his children, he loved his grand children Bianca, Jonathan, Marc, Christina, Malcom, Ashley, Julian, Gloria, Fiona and Gabriella and his great grandson Jacob. His Son in Laws Rev. Dr. Samuel Nicolas and the Honorable Pascal Montilus. He is also survived by his Sister Marguerite Etienne, and many nieces and nephews. He had great work ethics and encouraged all of those that he encountered to do the same. He was a devoted father, grandfather, godfather, uncle, brother and friend and was generous to everyone. We are truly blessed to have had him in our lives. May God bless his soul and may we cherish the lasting memories of all the good that he did. May he rest in peace. Amen.

Mr. Joseph Louis Jacques transitioned peacefully in Tamarac Florida at the Florida Medical Center at 1:30 am on Sunday, August 4th 2019 at the age of 95 years old. He was born on January 26th 1924 in Port-Margot, Haiti, the son of Dieujuste... View Obituary & Service Information

The family of Joseph Louis Jacques created this Life Tributes page to make it easy to share your memories.

Send flowers to the Jacques family.