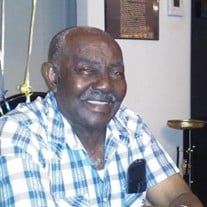 Lascelles McFarlane Brown was the 2nd of 6 children born to Stella Street Brown & Lynden Brown in Patty Hill, Hanover, JA. He attended Brownsville All-age School and was a top student in mathematics. He joined his father working on the farm at an early age. He later met and married Winniefred. The union produced 10 children in total, however 2 went home to heaven as babies and 2 have preceded him in death later in life. As a father, Papa was loving, kind and always a disciplinarian. He always taught us the way of the Lord. He was a firm believer in not “sparing the rod” and he never forgot, so we never bothered to run! He would always call us to share in his supper, and if we were asleep, you could be certain it was left for you till morning. Papa wore many hats in order to take care of his family. He was an entrepreneur and opened a grocery shop where he sold the produce from his farm. He was the best ice-cream maker in his time, and the entire district looked forward to buying from him on Saturday nights. He and Mama also made the best patties back then. In Patty Hill, he was also known to be an honest and reliable community leader. He was a wood cutter, butcher, trip coordinator and top farmer; producing the heaviest yam one year. He was also the president of the Farmer’s Association. He gave his life to Christ and became a member of the Patty Hill Holiness Church and began using all his talents for God. He was a choir member, Sunday school teacher and outreach leader, who started several Sunday schools in neighboring communities, leading to the start of a few churches. He was also a youth leader, men’s director, deacon and church board member. In 1959, Papa got the opportunity to travel to the United States on the Farm Work Program, cutting cane a few times, but mostly in the apple fields in New York. His leadership ability was quickly recognized and he was promoted to supervisor, and was able to recruit many other men to the program. He was the “letter writer” for the men who were unable to read or write. At nights there was a line of men waiting to get their letters written to send home to their families. He earned the name “Preacher” on the farm, because he never stopped telling them of the gospel of Jesus Christ. He became a resident of the U.S. in 1988, and from there proceeded to sponsor the rest of his family to the United States. Winniefred went home to glory in 2003. He then married Ida Brissett. Her 4 children easily accepted him as father; as they all knew him from an early age. Papa was a prayer warrior. In his retirement years he would spend hours praying for his family and the world at large and never missed his 2pm daily prayer. We looked forward to Papa’s long lectures and prayers at our family gatherings. His last line was always, “If we do not meet in this fashion again, let us be ready to meet on the other side.” Papa is survived by wife Ida; daughters, Delta, Elaine, Grace and Sonia; sons, Horace and Barry; sons-in-law, Michael and Dwight, and daughter-in-law Michelle. 23 grandchildren, 37 great-grandchildren and 11 great-great-grandchildren, 4 sisters, nieces, nephews and a host of other relatives and friends.

Lascelles McFarlane Brown was the 2nd of 6 children born to Stella Street Brown & Lynden Brown in Patty Hill, Hanover, JA. He attended Brownsville All-age School and was a top student in mathematics. He joined his father working on the farm... View Obituary & Service Information

Due to the effects of the COVID 19 pandemic, please pay your respects on Friday at the visitation, and let the family have a private service to follow

Lascelles McFarlane Brown was the 2nd of 6 children born to Stella...

Send flowers to the Brown family.