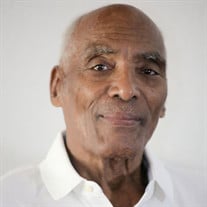 With great sadness, the Eyma Family announces the sudden death of their beloved Malherbe Gabriel Eyma, a cherished son and life-long patriot of Haiti, on Saturday, June 8th, 2019, at the age of 86 in Broward County, Florida. Malherbe was born... View Obituary & Service Information

The family of Malherbe Gabriel Eyma created this Life Tributes page to make it easy to share your memories.

With great sadness, the Eyma Family announces the sudden death...

Send flowers to the Eyma family.