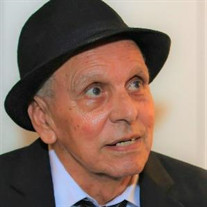 Dr. Mario Antonio Possas, March 11, 1942- February 9, 2020 passed away peacefully at the Florida Medical Center Vitas Unit, on February 9, 2020 with his family by his side and went to be safely home with his Lord Jesus Christ. Born on March 11, 1942 in Juiz de Fora, Minas Gerais in Brazil, Mario later moved to Sunrise, Florida, US following his children where he lived until his last days. Survived by his loving wife of 48 years, Helena A. Possas and lovingly remembered by his four children: Helen G. Possas, Luciana A. Possas, Cristina P. Furman, Mario A. Possas Jr. and his one grandson Lucas Cortes-Possas. Dr. Mario Antonio Possas was the son of Jose da Annunciacao Possas and Inelzira de Moura Possas from Sao Joao Del Rei, Minas Gerais, both children of Italian, Portuguese and Irish immigrants in Brazil. The middle child of the couple, he tragically lost his father at the age of 6 and soon after, his younger sister at the age of 7 years old. He went through many hardships as a young child growing up in a single parent home before he put himself in Medical School while working as a Dental Assistant for a local Dentist Dr. Elias Bara. He graduated as a M.D. from the Federal University of Juiz de Fora, M.G., Brazil specializing as an Obstetrician and Gynecologist in 1971. His first Hospital work was under Dr. Jose Carneiro Gondim in the Hospital of Santa Casa de Misericordiosa in Juiz de Fora, Brazil. He returned to the Brazilian Army Military Force after graduating as a Doctor and worked in the Armed Forces as a decorated Military M.D. Officer in Juiz de Fora. MG from 1973 to 1976. Dr. Mario A. Possas career went on to eventually help co-founded UNIMEDI in Juiz de Fora, a Health Insurance agency still in place in the city. He is now decorated as a doctor meritorious for the agency. He also worked at the following Hospitals in the same city: Hospital Casa de Saude, Hospital COTREL, Hospital Santa Casa de Misecoriordia, and "The Union of Sindicato dos Trabalhadores dos Condutores de Vehiculos" while maintaining his own private OB/GYN Clinic as well. Overtime, Dr. Mario A. Possas has cataloged over 5,000 births he brought into the world in private practice alone. His first job, as a medical doctor was a small town called Silveirania, in Minas Gerais where he drove 3 hours from here he lived and there was no hospital or health care in place. After 2 years with the help of County Mayor Mr. Jalmeno Lima de Oliveira, Dr. Mario Possas help established the first Health Center for the County region called “Secreataria Municipal de Saude de Silverania, Estado de Minas Gerais, Brazil". Today it is administered by the State of Minas Gerais employing hundreds of doctors in various small towns. It was at this town, Silveirania, that he met his wife Helena A. Possas and married her on December 12, 1971. Her father, Odorico Teixeria Campos help facilitated Dr. Mario A. Possas first job in the town. Dr. Mario A. Possas enjoyed game hunting, fishing and fishing farming and nature walking, hiking, bird watching, spending time in their family cabin in the mountains and he was a lifelong fan of The Fluminense, his Home Team of Soccer in Brazil. Dr Mario A. Possas also enjoyed light sunbathing on the beach and crossword puzzles. He was an avid reader and dabbled on the piano some, since all his aunts also played the piano and his children also played the piano. He enjoyed listening to all the music of Frank Sinatra and “The Rat Pack”. He was a fan of watching Western movies with Clint Eastwood and The Series of James Bond and Indiana Jones. Dr. Mario A. Possas also enjoyed playing jokes, playing little children mischief with his grandson and laughing. Dr. Mario Possas was an active member of Saint Gregory Catholic Church in Plantation, Florida along with his wife and son Mario Possas Jr.. Dr. Mario A. Possas will be remembered for his loving and gentle ways, for his good sense of humor, for his laugh, for being calm at all times, for loving to eat his desserts, for bringing flowers and writing loving notes to his wife out of the blue, for always citing the Ecclesiastes 3 to his daughters, for playing soccer with his son, for being a great dad and a great grandfather always with a candie and a soccer ball handy. In Brazil, he is remembered by being an amazing and generous person, a brilliant doctor, a doctor "of the people", a humble person, a person people could count on, a nature person, a military guy, a fishing and hunting friend, a devoted son, a loving husband, a family guy and a devoted Catholic to the Church and God. A MEMORIAL SERVICE & COMMITTAL SERVICE will be held Followed by the Inurnment at the Mausoleum ON DATE: SATURDAY, February 22, 2020 TIME: 11am AT: OUR LADY OF QUEEN OF HEAVEN CEMETERY - BIG CHAPEL ADDRESS: 1500 S State Rd 7 North Lauderdale, FL 33068 PLEASE: GPS North not Fort AND a CELEBRATION OF LIFE: to follow immediately after, AT the home of MARIO AND MALERIE POSSAS ADDRESS: 9795 Ridge Trace Davie, FL 33328 Flowers or a memorial gift to the family of Mario A. Possas are kindly accepted by the family. The family also suggests an alternative: A Tribute gift donation towards the Alzheimer's Research Organization in Mario A. Possas name at: https://act.alz.org/site/Donation2?df_id=32112&32112.donation=form1&_ga=2.9351733.1694300884.1581859355-1242074335.1581859355&_gac=1.174910102.1581859400.EAIaIQobChMIl6TLspXW5wIVhJyzCh3HEwCSEAAYASACEgKmNvD_BwE

Dr. Mario Antonio Possas, March 11, 1942- February 9, 2020 passed away peacefully at the Florida Medical Center Vitas Unit, on February 9, 2020 with his family by his side and went to be safely home with his Lord Jesus Christ. Born on March... View Obituary & Service Information

The family of Mario A Possas created this Life Tributes page to make it easy to share your memories.

Send flowers to the Possas family.