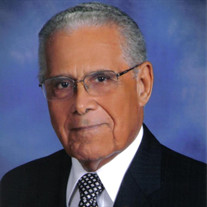 A memorial service has been scheduled to celebrate the life of the Rev. Dr. Melville B. Herron, one of Lauderhill’s most prominent civic activists. The service will be at 10 a.m. Sept. 12 at Grace Funeral Chapels, 5980 W. Oakland Park Blvd., Lauderhill, Florida 33313. Rev. Herron's body was cremated following his May 3rd passing.  Rev. Herron and his wife Grace relocated to South Florida in 2001 after they both retired from hectic careers in New York – her an RN and him, a Department of Transportation engineer for New York City. They moved to Lauderhill, to the spacious, tranquil, suburban Inverrary neighborhood. Rev. Herron had no intention of being idle in retirement. He caught a second wind and took on a full roster of civic and cultural duties and activities, aimed at bettering his community. Rev. Herron became know for his unrelenting dedication, commitment and compassion. He served as chair of the Lauderhill Planning and Zoning Board; president of the Inverrary Homeowners Association. He spearheaded a successful push for a multimillion dollar bond issue in Lauderhill for civic improvements. He graduated from Lauderhill’s Citizen’s Police Academy. One of his biggest civic accomplishments was having a strong guiding hand in Lauderhill being named All American City in 2005. A year later, he was named as the city’s Lauderhill Citizen of the Year. He was also very active in the Masons, one of the world’s most well-known philanthropic societies. He lived his life by the many Masonic virtues – honor, integrity, trust, compassion for his fellow man. And most of all, keeping God central in his and his family life. In addition to his civic activities, Rev. Herron also shared his unshakeable faith in God, day in and day out - not in a boastful way, but encouraging and uplifting. He continued giving sermons, and officiating at christenings, weddings and funerals until his failing health forced him to stop. In addition to Grace, his wife of 61 years, and sons, Dwayne and Dexter (Hillary), he is survived by brother Edward of Houston, and sisters Gloria Dewdney (Trevor) of Jamaica and Monica Herron of Indian Lake Estates, plus a list of nieces, nephews, others relatives and friends too numerous to name. The memorial service will be livestreamed on Facebook

A memorial service has been scheduled to celebrate the life of the Rev. Dr. Melville B. Herron, one of Lauderhill&#8217;s most prominent civic activists. The service will be at 10 a.m. Sept. 12 at Grace Funeral Chapels, 5980 W. Oakland Park... View Obituary & Service Information

Send flowers to the Herron family.