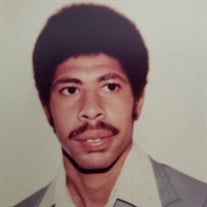 Michael Edwin Bewry, affectionately known as "Mickey," was born on April 18, 1960, at Andrews Memorial Hospital in St. Andrew, Jamaica, W.I. He was the oldest of three children born to Chancel T. and Daisy Marr-Bewry, the other two children Colette and Chancel, known as Al. As a child, while the family lived in Kingston, Mickey attended the School of Hope for Mentally Handicapped Children located in Kingston. There, he learned the alphabet and could write his first name. Mickey was creative and good with his hands and would bring home crafts from school. In later years, he did things that some would consider destructive but that were a result of his curiosity and creativity. For example, he would pull everything apart to see how they worked and try to put them back together, including remotes, radios, phones, and toy cars. In January 1964, his family moved to Sunnyside, Spanish Town, where he grew up in a small community where he was well-loved. Mickey's most enjoyable times were the summers spent in Ballimony, St. Ann. There, he loved spending time with his grandparents, Maudeline "Mama" and Albert "Papa" Carter; his uncles, Renford (Teddy) Carter and Osmond Carter; and his cousins, Cordel Humphrey and Valerie Brown. He loved riding the donkey and playing outside with his cousins. Mickey had an excellent memory. For example, he never forgot faces. He remembered almost everything from childhood. For instance, in 1969, Mickey witnessed a collision between a bus and train on the train tracks in Jobs Lane, Spanish Town. He was only nine years old when this occurred, yet he still talked about it until he was 60 years old. In December 1980, Mickey moved to Lauderdale Lakes, Florida, in the United States, with his family. He loved animals and would approach any dog and pat its head. Mickey would catch lizards with his hands and pick up frogs. However, one exception was roaches: he would never go near a cockroach whether it was dead or alive. Another pastime he enjoyed was watching T.V. Some of his favorite shows were Bonanza, Knight Rider, Gunsmoke, Walker Texas Ranger, Wheel of Fortune, Jeopardy, Price is Right Little House on the Prairie, Magnum P.I., The A-Team, and Blue Bloods. He spent many hours walking around the pool or standing by the fence outside, watching people go by. He also enjoyed going for rides in the car, especially driving to Kissimmee to visit Cynthia (Aunt Senny) and William (Uncle Billy) Wilson, and driving to Tampa or Palm Bay to visit Al, Andrew, and Aldrich his brother and nephews. Lastly, he loved going out to eat at places like McDonald's and Red Lobster. There was a special bond between Mickey and his siblings. He was very protective of them growing up. Occasionally, he called his younger brother "Bad Boy." A big smile would come over his face as he waited to see what trouble Al would get into. On many occasions, Mickey would say, "Bad Boy, what did you do?" and they would both laugh hysterically. Mickey also had had a special bond with his cousins, Raymond Bewry, who he affectionately called "Rainbow," and Cordel (C.J.) Humphrey, Jr. Mickey always had something in his hand that he called his radio or his phone. He could often be heard talking on the phone or singing. He loved music. Gospel songs and Easy Listening music kept him calm. His favorite song was "How Great Thou Art," sung by Elvis Presley. He also loved going to the movies. Mickey was caring, loving, and willingly shared what he had and even what he did not have. There were many times he would point to the moon and tell Joyce Farquharson, "It's my moon Joyce, my own. I Love you eh nuh. My moon, I give it to you." With a smile on her face, Joyce will tell you that the moon belongs to her because Mickey gave it to her. Mickey loved babies and was very protective of small children. In 1981, during the Summer, his cousin, Erica Hay Thompson, was about three years old when she fell in the pool. Mickey was the one who went inside and told Uncle Allan, "Erica in the pool." Likewise, in Summer of 1992, his nephew, Andrew, was three years old when he went outside without anyone noticing and fell in the pool. Mickey told his father, Chancel, and his brother Al, "Andrew in the pool." Both Erika and Andrew are alive today because of Mickey. On January 21, 2021, Mickey was hospitalized. He was called to rest on March 16, 2021. Left to cherish his memory are his mother, Daisy Marr-Bewry; sister, Colette Cooke; brother, Chancel (Al) Bewry; brother-in-law, James Cooke; nephews, Andrew and Aldrich; aunts, Cynthia (Senny) Wilson, Lorna (Patsy) Kidd, and Neta Hay; uncles, Renford (Teddy) Carter, Savino (Pep) Conley, William (Billy) Wilson, Lloyd Kidd, and Allan Hay; and a host of cousins, many extended family members, and cherished friends. He was certainly loved and will be dearly missed. "Weeping may endure for a night, but joy cometh in the morning". Psalm 30:5 Lovingly Submitted THE BEWRY FAMILY

Michael Edwin Bewry, affectionately known as "Mickey," was born on April 18, 1960, at Andrews Memorial Hospital in St. Andrew, Jamaica, W.I. He was the oldest of three children born to Chancel T. and Daisy Marr-Bewry, the other two children... View Obituary & Service Information

The family of Michael Bewry created this Life Tributes page to make it easy to share your memories.

Send flowers to the Bewry family.