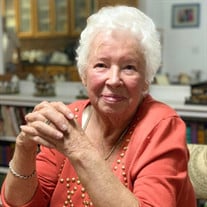 Pauline Callaghan-Ohland passed peacefully surrounded by family on March 30, 2021 in Southwest Ranches, FL. Pauline was born and raised in Manchester, England. She attended boarding school at Loreto Convent for her childhood years and remained a life-long friend and contributor to the school. Pauline married her childhood sweetheart, Peter Callaghan in 1953. They had three children: Stephen, Anthony and Julia. Pauline and Peter raised their family in Sale, England before immigrating to Basking Ridge, NJ in 1978. Adopted as an orphan at the age two from the Catholic Rescue Society in Manchester, England, Pauline grew up with her adopted family and attended Loreto Convent in Altrincham, England from the age of 8 through 18. There she studied elocution, dance, tap, musical comedy, voice, choir and gymnastics. Her love of the theatre was instilled by her Father who often took her to plays in Manchester. Pauline longed to be an actress, but that was not an acceptable profession for an educated young woman at that time. Pauline married at the age of 19 and while on a seaside visit with her sons and mother-in-law, Pauline was discovered by a talent agent. Pauline was finally able to fulfill her dream of acting when she became an extra on a soap opera in England called “Coronation Street”. Her character, Evelyn, was a gritty, cigarette smoking, beer drinking “colorful character” who frequented the local pub. Pauline had roles in the following movies: “Patton” with George C Scott, “Charlie Bubbles” with Liza Minelli and a “Dickens” series produced by BBC. In 1978, she immigrated to the United States and became a real estate agent. After the death of her husband in 1995, Pauline moved to The Villages in Lady Lake, FL where she got involved in the Way, Way, Way Off Broadway Players and met her future husband Johannes Ohland. Pauline got the most pleasure in life out of travelling whether to see her children and grandchildren in England, New Jersey and South Florida or to visit her beloved Bellagio in Italy where she vacationed for many years. Always up for an adventure, Pauline even took up riding on a motorcycle with her husband at the age of 70. Pauline was fiercely competitive and loved to played games of all types. Never let her small stature fool you, she could beat the most competent ping pong player. In her early years, she played bridge almost weekly and in Florida she played card games such as Hand and Foot and the notorious “Callaghan Uno”. She has instilled her love of games in the entire family. Pauline is pre-deceased by her loving husband of 43 years, Peter Callaghan. Survivors include her husband, Johannes Ohland, sons Stephen Callaghan (Shobie Callaghan) and Anthony Callaghan (Dianne Callaghan) and daughter Julia Hand (Timothy Hand) and by her seven grandchildren – Brittany Callaghan of Swindon, Wiltshire, England; Gabrielle Vernon, Danielle Vernon, Joelle Vernon and Benjamin Callaghan of South West Ranches, FL ; Matthew Hand and Michael Hand of Flemington, NJ and her great granddaughter Aiyanna Dawson of Swindon, Wiltshire, England. In lieu of flowers, please donate funds to Aids Orphans Rising – Ethiopia to aid the orphans associated with the Religious Teachers Fillippini at https://www.aidsorphansrising.com/. The Religious Teachers Fillippini work with the children of Ethiopia and other parts of the world to give them an education, enough to eat, good water, and the skills to become healthy and productive adults. Additionally, those who wish are encouraged to have a Mass offered for Pauline in their home parish. Should your beliefs be non-Christian then offer your prayers accordingly. All graciously accepted! A public Mass of Christian Burial and Life Celebration service is being planned for a later date. ***Due to the inability to have a public ceremony at this time, and knowing how vital the love of family, friends, and the community is when someone passes, everyone reading this is encouraged to leave a detailed note on this page—perhaps a favorite story, or maybe the way Pauline touched your heart—something to help inspire a measure of comfort and hope to all who read the comments.***

The family of Pauline Callaghan Ohland created this Life Tributes page to make it easy to share your memories.

Send flowers to the Ohland family.