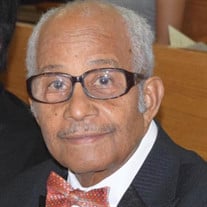 Raymond Racine entered into eternal peace on December 11th, 2020 in Fort Lauderdale, Florida. In lieu of flowers the family is asking for a donation to be made in memory of Papou Raymond to the Haitian American Caucus - Haiti. Since 2003 the Haitian American Caucus has supported the functioning of Ecole Shalom, a primary school in Croix-Des-Bouquets Haiti. Your donation will help invest in the future of Croix des Bouqets’ youth while honoring Raymond’s passion for education & love for his birthplace. Donations to Haitian American Caucus - Haiti can be made at https://hacglobal.org/donate-1. Raymond, affectionately known as Papou Raymond, was born in the small town of Croix-des-Bouquets, Haiti on September 26th, 1931. He was the 6th of 8 siblings born to Edouard Racine and Josephine Halaby Racine. While growing up in Croix-des-Bouquets, Haiti with his brothers and sisters, he enjoyed playing soccer and life in the countryside. As a young man who was committed to physical fitness, he built his own set of parallel bars to work out in his backyard. He completed his primary education at the catholic school Jean Marie Guilloux in Port-Au-Prince and attended College Odeide for secondary school. As a young adult, he also attended the Institut Lope de Vega where he learned to speak Spanish and later received a scholarship to continue his Spanish studies in the Republic of Columbia. Upon his return to Haiti from South America in the late 1960’s, Raymond then migrated to the United States. He met the love of his life, Marie Jose Lherisson, in New York in 1970 and married her on June 12th, 1971. Raymond and Marie had 3 children – Ralph, Regine, and Rudy. Raymond’s pride and joy were his family. He was an amazing family man who cared for and was always there for his family who adored him. Everyone loves and uses his signature quotes. Raymond lived in the New York and New Jersey area for most of his life. He worked as a banker for over 20 years. He worked for Citibank, and later at Bank of America where he retired after 15 years there. He also worked part-time as a realtor with Coldwell Banker and invested in real estate. After retirement, Raymond and Marie moved to South Florida. They later moved to Orlando to be closer to his daughter and her family. He spent many years in Orlando playing an active role in supporting his daughter, his son-in-law as well as his grandchildren, who cherished this time fondly. When his grandchildren were old enough to begin driving, he decided to move back to Fort Lauderdale where he spent the last two years of his life. After family, the second love of his life was “cars”. Raymond loved buying and selling cars and was always looking for the next car “deal”. He has owned and sold multiple cars in his lifetime. He also helped countless friends and family members address their car needs. Raymond was preceded in death by his parents, Edouard and Josephine Racine; his siblings Edouard, Edzer, Hugo, Fritz, Rose, and Jean Claude. He is survived by and will forever be missed by his wife, Marie Jose; his children, Ralph (Lyvie), Regine (Norman), and Rudy (Danielle); his sister, Simone; his grandchildren, Avery, Justin, Joshua, and Jasmine; many cousins, nieces, and nephews.

Raymond Racine entered into eternal peace on December 11th, 2020 in Fort Lauderdale, Florida. In lieu of flowers the family is asking for a donation to be made in memory of Papou Raymond to the Haitian American Caucus - Haiti. Since 2003 the... View Obituary & Service Information

The family of Raymond Racine created this Life Tributes page to make it easy to share your memories.

Send flowers to the Racine family.