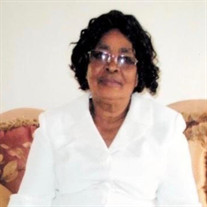 Biography Rose Metayer Montour July 15, 1936 - January 06, 2022 “…Blessed are the dead who die in the Lord from now on.” “Yes,” says the Spirit, “so that they may rest and have relief from their labors, for their deeds will follow them.” (Revelation 14:13) Sister Rose was a loving mother and a pillar of the family. In addition to raising her own children, she also raised her sisters, nieces, nephew, and cousin with discipline, prayers, and love. Rose was born in Gonaives, specifically Plaine de l’Abre. She was the daughter of Francois Metayer and Lucianne Pierre. She was the oldest of four siblings. At a young age, her family moved from Gonaives to Arcahaie, where she later met her husband Erick Montour. From that relationship, the couple was blessed with three children: Marie Deslourdes Montour, Pierre Guttemberg Montour, and Marie Micheline Montour. She was a sweet, gentle, loving and caring mother and grandmother. In 1988, Sister Rose moved from Haiti to the USA, accompanied by her children to join her husband. She made her first stop in Boston, where she spent 15 years in the snow. In January 2003, after the passing of her husband, she decided to move to the sunshine state, Florida. She was a woman of many great qualities. She was unequal when it came to hospitality. Her house was like a Motel, where people would come and go on a weekly and daily basis. If Joppa had a Tabitha (Dorcas), Rose was also a duplicate of that great servant of God. She used to provide for missionaries, friends and strangers alike. In her profession as a Seamstress, many poor people were blessed by garments which Sister Rose had made for them. She also was a woman of faith and a prayer warrior. Her ultimate goal was to see all her children and grandchildren serve the Lord; because to her, a relationship with God guarantees a stable and joyful life. She made it her mission to encourage them to pray about every situation, regardless of the difficulties that they are facing. She was a cheerful, devoted, and respectful servant of God. The Great Commission was part of her agenda. Many people came to know the Lord Jesus Christ through a prayer cell and evangelization she started in her neighborhood. That great ambassador of the Lord finished the race in style after the completion of her mission. Sister Rose left to be with her heavenly father, the way she had requested, on Thursday January 6, 2022 after a sudden heart attack at the age of 85 years old. She will be missed by her: Children: Deslourdes Pierre and her husband Dr.Whistler Pierre, Micheline Thelemaque and her husband Dr. Wilner Thelemaque, and her son Guttemberg et her adoptive daughter Onese Alexandre, Sister: Saintalyse Semexant, Grandchildren: James and family, Whistlourdes, Nethania, Frantzler and family, Sanica, Tinesha, Shawn, and Sebastien, Nephews and Nieces: Johnny and family, Hudson and family, Hodeler and family, Katia and family, Cousins: Family Morvan, family Pierre, family Geffrard, Many friends and church families;

The family of Rose M. Montour created this Life Tributes page to make it easy to share your memories.

Send flowers to the Montour family.