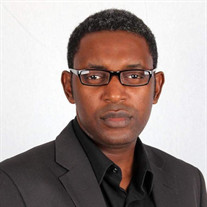 Smith Mitho Francois 1974-2021 “From the time you were born to the time you died What did you do in between” ? Smith Francois, 47, passed away at westside Regional Hospital on Thursday, December 23, 2021. Surrounded by his spouse Marly Antoine, his children, family members and close friends. Smith was born on November 21, 1974, to Hervey Francois and Claudette Trezil in Port-au- Prince, Haiti. He was the second son born to the couple. After graduating High School, Smith migrate to the United States residing in Boston for a couple of years then moved to Florida, where he resided until his passing. The joy of smith’s life was his Faith, family, networking, and Business. Smith was an ordained minister and Chaplain with a true heart for service and serving. His Children were his prized treasures loved each one with impartiality: He was a successful business networker with names as such; Amway, Mary kay, Ardyss, Melaleuca, Organo Gold, TLC, I AM Mastery Academy...and many others. He was a business owner CEO of Zip2Million, Realtor and his favorite profession was being an insurance Agent. Smith Francois was a; Life Coach, strategist, goal setter, goal achiever, Go getter, a Man of discipline, a brilliant mind, a Man of all Men. Always ready and prepared to face the next challenge no matter how big or small and always empowering others. His wife Marly was his “WHY”! Although smith wore many hats, he was most proud of being a father to his six Children Claudy, Marcange, Merisha, Samantha, Jaden and Samuel Whom he called “My mini Me.”

The family of Smith Mitho Francois created this Life Tributes page to make it easy to share your memories.

“From the time you were born...

Send flowers to the Francois family.