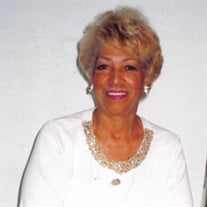 OBITUARY YVONNE CAROL BOLER JOHNSON-RICHARDSON was born on July 9, 1936 in Chicago, Illinois to the union of Virgil Bert Boler and Alyce Frances Ford-Boler (both deceased). She was the first of the four children born. A brother Vincent preceded her in death at the age of three months in 1938. She closed the chapter of her life on May 11, 2020. Yvonne reconfirmed her faith in Jesus Christ on May 1, 2020. Yvonne joined a neighborhood church and was baptized at the age of twelve. During that period she was a member of the choir and the usher board. She attended Forestville Elementary School and graduated from Du Sable High School. She furthered her education by attending Kennedy King City College (formerly known as Wilson Junior College) and earned an Associate of Arts Degree. She earned Bachelor of Science degree from George Williams College, formerly located in Hyde Park, IL; a Master of Arts degree in Human Relations and School Psychology from Governors State University, University Park, IL. She also earned a Paralegal Diploma from Roosevelt University and a Medical Transcription Diploma from Atlantic Technical Center, Coconut Creek, Florida. Yvonne taught Physical Education and held other positions at Paul Robeson High School in Englewood, IL such as Athletic Director, Guidance Counselor, Coach of Girl’s and Boy’s Swim Teams, Majorettes, Modern Dance and Girl’s Bowling Team. She enjoyed her twenty-three years at Robeson High and upon retirement in 1994, she and husband Jesse Richardson relocated to Margate, Florida. Before becoming an educator, Yvonne was a professional exotic dancer performing at many cabaret parties and events throughout the Chicago area. She was known as Yvette, The Body Beautiful and performed at The Esquire Club, formerly on 95th and Wentworth Avenue. Yvonne gave birth to a beautiful boy named Michael Andre in 1957. He, however, passed away at the age of fifteen. Yvonne married De Norvell Johnson in 1967 and they divorced in 1969. She married Jesse Richardson in 1985 and they divorced in 2009. Yvonne loved to travel and had been all over the world. She enjoyed such countries as Egypt, Greece, Turkey, China, Spain, France, England, Switzerland, Vietnam, Malaysia, Korea and many Caribbean countries, as well as Hawaii. She loved animals and had many pets. There were guinea pigs, cats, frogs, salt water and fresh water fish tanks, a huge white rabbit, dogs such as Rebecca a Shih Tzu rescue, Niko a Welsh Corgi, Kelli, a Bichon Frise and Keke a mix of Bichon and Shih Tzu. She even had a tattoo of a butterfly and a mermaid. We mourn her passing, but celebrate her life. She did it her way. She leaves to cherish her memories as well as her family: Her loving sister Audrey Haney, her loving brother Carl Boler (Valerie), her loving nephews and nieces Carl Haney (Denise), Pamela Haney, Bryan Haney, Kim Thatch (Yarnell), Cheri Boler and a host of loving grand nephews and nieces along with loving family and friends.

OBITUARY YVONNE CAROL BOLER JOHNSON-RICHARDSON was born on July 9, 1936 in Chicago, Illinois to the union of Virgil Bert Boler and Alyce Frances Ford-Boler (both deceased). She was the first of the four children born. A brother Vincent preceded... View Obituary & Service Information

The family of Yvonne Richardson created this Life Tributes page to make it easy to share your memories.

Send flowers to the Richardson family.